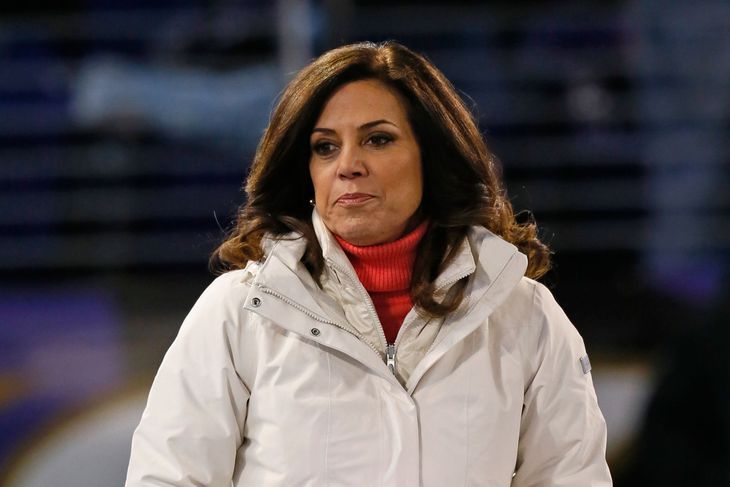 Women’s Sports Month: Michele Tafoya on identity through sport and competition regardless of gender

When people across America turn on NBC Sunday Night Football, there are several things they can count on. There will be a flashy and catchy theme song (currently sung by country star Carrie Underwood), Al Michaels will provide one piece by piece, and Michele Tafoya will chase the coaches along the sidelines.

During a sports broadcasting career spanning more than 20 years, Tafoya has covered almost every sport, from football and basketball to rhythmic gymnastics. She has worked for all the major networks except Fox and has covered the Super Bowl, the Olympics and still found time to connect with her broadcasting roots, running a radio talk show on Time to driving in his adopted Minneapolis for over three years at the height of his life. participation in ESPN’s NFL coverage.

Now that she has caught her breath Chasing Patriots Safety Malcolm Butler after her interception that won the championship, Tafoya told USA TODAY why she thinks sports are so important to girls.

USA TODAY: Thank you for taking the time to discuss women’s sports. Why is sport so important for girls today? What do they mean to you?

TA: I think they give girls a way to connect with each other, to connect with strengths that they maybe didn’t know they had. My daughter is 6 and has been playing sports for 3 years, and to see her feel accomplished and fulfilled with every skill she learns is to watch her grow. You see his confidence soar. I also love the team aspect. She loves being part of a team and she meets friends she wouldn’t meet otherwise. She learns to be a team player and a leader and follower when she needs it. All of these skills come out of sport. There is focus, hard work and determination, strengthening you both physically and mentally. It’s great to see girls absorb all of this and enjoy it.

My father was a pure Spanish man, and I feel lucky enough that he encouraged all of his daughters to play and watch sports when we were young. He took us to the Olympics, to baseball games, and we went to my first baseball game and Nolan Ryan threw a hit. And he made me love football. I’m so grateful because it gave me this amazing career. I play golf, I don’t play a lot of other sports right now in my life, but feeling like I could date anyone, male or female, and socializing and being active is a very rewarding thing.

WE AT: When did you know that sport was a key part of your life?

TA: I don’t remember ever having felt that way. We were all athletes in our family. My father was a huge sports fan. He liked athletics, football and basketball the most. It was from the start. My brother was an amazing All-State basketball player in high school, so it was a central part of our lives for as long as I can remember.

TA: I grew up in the 70s and girls weren’t as involved in sports as they are today. There was a little bit of, “It’s a little different and new, and not all of my friends are doing it.” Sometimes I got discouraged easily and felt like a failure. Especially having a brother who was such a great athlete. It was hard to see him do everything so well and not be able to match that. But back in the day, when you pick teams in elementary school, girls were often not picked first.

When I was in sixth, I was the quarterback on my flag football team, and I had a great WR, and it was so exhilarating for me to be able to play with boys. There were those challenges, and for some reason I was confident in my ability to throw. I grew up in a time when so much was starting to change at a rate we hadn’t seen. You felt like you were going to excel, or maybe not, and how would you feel like that if you didn’t. And maybe that’s why I ended up as a commentator rather than an athlete.

WE AT: If there is one thing you could say to girls and women who play sports today, or who might want to work in sports journalism, what would it be?

TA: I would say don’t think of yourself as a commentator, analyst, or commentator. Just think of yourself as a play-by-play commentator, analyst, announcer. Do not add the female. Obviously, more women play per game in women’s sports than I do. But look at Doris Burke, who broke new ground with play for play in the NBA. When I first started I think I was the only woman working in sports when I had my radio job. I was almost always the only woman covering matches and press conferences. I didn’t let him bother me. Did I feel it? Sure. But I saw myself on the same ground as all the other journalists at this press conference, and I would compete with them at their level. I don’t think I should have a better opportunity because there were fewer women journalists or all that stuff.

If you put that word “woman” in front of your title, you make yourself different, and I don’t think it has to be that way. You just say “I’m a journalist” and go do that. I have met women who were intimidated to go into the locker room and you could feel the chip on their shoulder, and I can tell you these women are no longer in the business. I think this also applies to any business. You should embrace whatever makes you feel good, but never let it define or separate you in a way that gives you a chance or makes you feel inferior or less capable.

WE AT: When did you realize you were a role model for other girls?

TA: I have a hard time with that, because sometimes I’m going to be recognized, and I still don’t realize that people see me on TV. I’m going to tell you a random funny story, that’s where I’ve spent most of the last 20 years, and as I walked up to the door of one of those SkyClubs, and two women walked past, and in conversation, and one of them said his daughter wanted to get into sports reporting and be like Michele Tafoya, and then they looked up and I was there.

Honestly, I still don’t feel like a model that way. If people feel that way, I really hope I’m doing the right thing all the time and giving myself a good role.

TA: It was so weird. If you ever hear people talking about you like you’re not there, and to hear it that way, it was like you’re laughing at me. But it was pretty cool.

WE AT: Has working in a male dominated industry like sports journalism ever been difficult for you? How? ‘Or’ What?

TA: I think my first full time job on the air was in Charlotte on radio, and I think I went through a lot of growing pains there. I didn’t want to be treated like, ‘Oh, maybe she didn’t know that because it’s a her.’ But when I knew my stuff, I was sometimes asked about it. At the tournament in 1993, Jason Kidd was the playmaker at Cal, my alma mater, and they had a great team. They beat UCLA at UCLA. As it turned out, in the tournament that year, they were lined up to play Duke in Sweet 16. And I picked Cal on the air, and I got scolded. And Cal beat Duke. The good part was that the next day people called and said, “Dude, I guess you knew what you were talking about.” Somehow they needed proof, and I don’t think that would have happened if I was a guy. Because I was new to town and it was very unusual to hear a woman talk about sports on the radio, they really questioned that. We had to put our heads down and keep moving forward day after day.

It was not easy to have this commitment and this belief in me all the time. It’s a hard thing to do when people tell you otherwise. Somewhere in me I knew I could do it. So I just kept after that.

WE AT: Are you proud of the success you have had working in sports, regardless of your gender?

TA: Do you know what I’m proud of? I am very proud of my longevity and the scale of the events I have covered. The university world series, the three-time Olympics, the Super Bowl. I’m proud of this magnitude and I’m really proud to be a part of the group I’m with on Sunday Night Football. This group works very hard, and it might be hard to imagine, but we’re preparing like no other show I’ve ever been on. We work together and we support each other, and I’m really, really proud to work with Al Michaels and Cris Collinsworth and the team.

WE AT: Who has been your greatest mentor in sports? Do you see yourself as a mentor to other journalists now?

TA: My greatest sports mentor was my father. He trained me in a number of things and exposed me to all different sports and gave me great opportunities to learn. In this area, my Sunday Night Football producer, Fred Gaudelli, has been the greatest mentor for me. He was a great champion and a coach, and he made me better.

People have come to me for advice and I have worked with people. I try to help people when I can. I also know that everyone in this business takes a unique path to where they arrive. Mine was no exception, and I probably wouldn’t suggest going my way. I encourage people to find their own way. I never want to impose my philosophy or my approach on anyone. But I’m certainly open to answering questions and being a sounding board.

WE AT: What else do we need to know?

TA: Diffusion is harder than it looks!