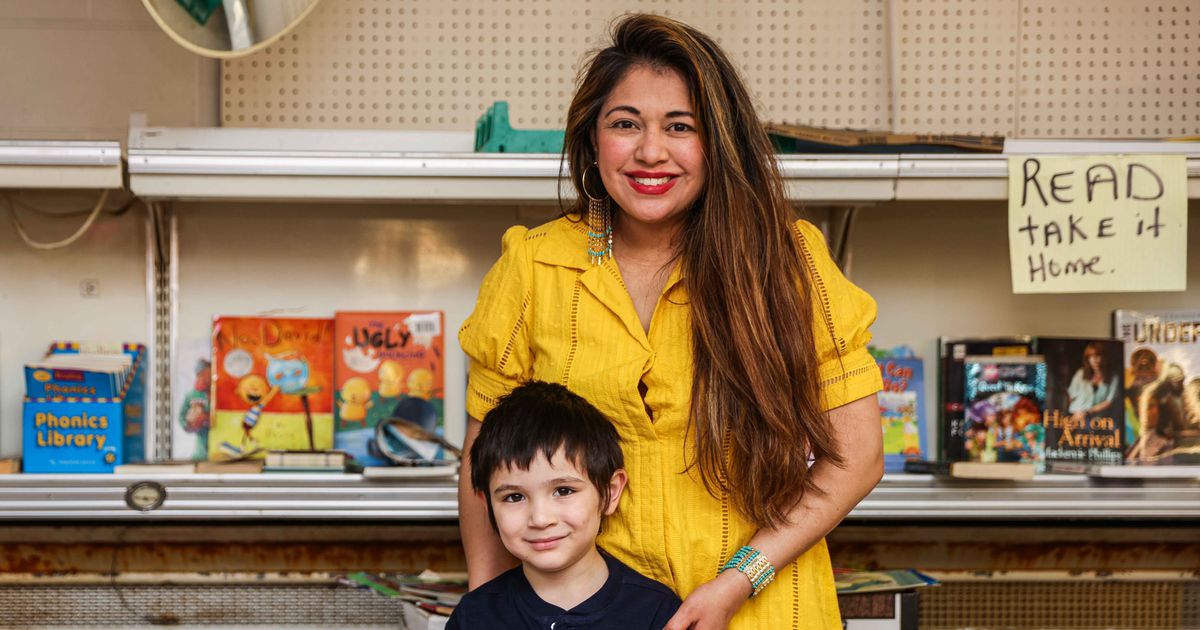 
Tucked away in the corner of a small brick store is a commercial-sized store, top loading beverage cooler.

But instead of soda, juice, and water, he’s almost to the brim with books. Some are in perfect condition, some are slightly worn.

To a passing customer, the books may seem out of place. For regulars, they have become a must.

Allen’s grocery store is located on the corner of Lawrence and Stephenson streets in South Dallas – near Elsie Faye Heggins Street. For six decades, it has been the perfect place for a cold drink or a quick bite to eat.

In recent years, it has also served as a community library, following a conversation between a mother and her 3-year-old son.

“What are we doing for fun that doesn’t cost money?” Nelly Cuenca asked her son, Bean.

Cuenca is the founder of MaaPaa, a non-profit organization that supports single mothers raising sons. The organization provides material goods and runs emotional support groups, in addition to other services, to families in need.

When she heard Bean’s response, she asked how they could support MaaPaa Moms more.

“We can create a library,” Bean said.

Cuenca tried to find a way to gently reject the idea of ​​his son. There was no way for the two of them to create a library. They didn’t even have a building. It didn’t stop Bean.

Bean has spent a lot of time at Allen’s because his grandmother, Silvina Nohemi Cuenca, has worked there for almost 20 years.

One day he asked his grandmother if he could claim a corner of the store for the library. She gave him the OK, without thinking about it.

But soon after, his grandson showed up at the store with 10 books he had grown too big. Then Nelly Cuenca recorded a video of Bean asking for donations and shared it on social media.

“People started cleaning their own closets and taking out books. Before you knew it, we had distributed 5,000 books. “

Although Allen is already a neighborhood landmark, it quickly morphed into a mini community center. It has become the home of regular reading circles for the children of the region and the children of MaaPaa mothers.

LaJuana McQueen, who grew up a few blocks from Allen, has seen the library grow since its inception. At first, the few donated books were located near the register. McQueen noticed this because she often stopped by for after-school snacks for her nieces.

It didn’t take long for the girls to ask to go to the store for more books. McQueen also took his 2-year-old grandson to reading circles before the pandemic put them on hiatus.

“There are a lot of kids in the neighborhood now,” McQueen said. “So that they have the opportunity to go get books and have something to read, that’s the best.”

The Martin Luther King branch library is closest to the grocery store. For those who don’t have a library or transportation card for the three-mile trip, Bean’s Book site is the perfect solution.

Nelly Cuenca tells customers to keep the books because they get so many donations, but most people give them back for others to benefit.

Bean’s viral video, now 5, has since died out, but the donations haven’t stopped.

Nelly Cuenca connected to Aidee Lomeli via LinkedIn. The Fort Worth resident used to work for the Boys and Girls Club and she finds donors in Dallas and beyond to collect books aboard the wagon.

When the first two spoke, Nelly Cuenca told him how the mini-library was born.

Lomeli now asks people she knows about donated books and brings them with her whenever she visits Dallas.

“I know people who have kids, and as the kids get older you erase the books and sometimes you just don’t know what to do with them,” she says.

The library inspired the Cuencas to continue their literary adventures. Nelly Cuenca and Bean are co-authors of a book to be published this fall. It is the first of what Nelly Cuenca calls a “Bean Series”.

Because Bean is homeschooled, he spends a lot of time listening to his mom’s virtual calls and seminars. Once, after leaving a meeting about mental health, Bean asked about bipolar disorder.

“Then I recognized, how many people talk to their kids about mental health?” she asked.

“This is how this small series was born. These will be short readings, maybe 14 pages. But they’re all based on actual conversations I had with my son.

After their first book is published, Bean can cross off a goal on his bedroom whiteboard: become an author before age 10. His other aspirations are longer term: to travel in space, to become a pilot and to be president.

One of her mother’s many goals is to expand the community library initiative in South Dallas.

She added that Bean’s library has had more than just an impact on the community.

Her son taught her not to wait to make her dreams come true.

“If you really want to do something, you can do it now,” she said.

“Align yourself with the people who are going to uplift you and make it happen.”