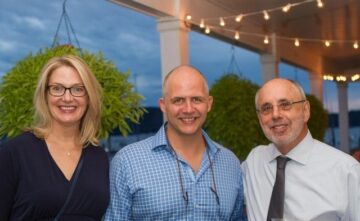 “We are not competing with New York, we are growing our own artistic brand in Westchester where there is so much fertile material,” said Nathan’s Flower (Nate), co-producer of Westchester Collaborative Theater The inaugural three-part festival of (WCT) Hudson Valley New Voices (HVNV), streaming on alternate weekends from May 20 to June 20. Alan lutwin, executive director of the Ossining-based theater company, is a co-producer.

Flower, associate chair of the theater department at NYU Tisch and a resident of Ossining for a dozen years, continued, “While New York is a world theater center, Westchester and the Hudson Valley region can centralize and mobilize to create a world-class theater. “

Strong words from a theater professional who has lived much of his life in Astoria and has been integrated into the city theater for more than 30 years, first as an actor and, more recently, mainly in as an instructor, director and choreographer of physical performance.

“I used to think of myself as a City-based theater maker, but this field is ripe for growth and change and capable of producing thoughtful and relevant work. County theater companies have an opportunity, even a obligation to continue to improve the quality of theatrical creation in Westchester, ”said Flower, artistic director of the Hudson Valley Moving Company (HVMC), a troupe of expressive movement actors that perform throughout the county.

During a 2017 lunch with Lutwin, a meeting organized by Henry welt, CEO of Ossining Innovates !, Lutwin highlighted the WCT’s commitment to diversity. Flower, who has long advocated that the theater should truly reflect society, applauded, stressing that inclusiveness should be multigenerational.

Flower had become a veteran director / curator of the WCT when he agreed to co-produce the festival and direct Gen Z Outloud at the end of 2020 in 40 submissions and 14 selections.

“The reading committee couldn’t believe the age of writers!” Flower said. In a talk-back, playwright Kat Bellew said, “I write a lot of things that are disturbing. I’m not good at happy endings. I want to leave the audience with an emotional resonance. “

Flower has her own talented Gen Z contingent at home – Son Lowden, 18, is the broadcast technician for HVNV; the girl Addison, 16, played as a percussionist with HVMC; son Junot, 13, is a cellist and jazz drummer. Wife Missy Fleur played with WCT, including HVNV.

Vintage Voices, dramatic stories told by seniors, came to life thanks to the WCT actor Christine Fonsale which launched an initiative based on a Life Stories program. She interacted with residents of Ossining Atria via Zoom, assisted by Lorraine Festa, director of Atria Engage Life.

Fonsale said, “The beauty of the program is that it gives residents the opportunity to form a community. They are amazing people and their lives are incredibly rich. She also created a mini-group through Bonnie Coe, member of the Ossining Arts Council.

Voices of Color, played by people of color, is dedicated to the memory of WCT writer / director / actor Joe Albert Lima, who died in 2020. Emerging playwright and long-time WCT member Misha Templar Sinclair took over as director and producer with co-producer Melissa Nocera.

According to Sinclair, who researched scripts from community groups and places of worship, “The plays are a compilation of lives, values ​​and experiences ranging from Jim Crow to life as a person of color in the world. Contemporary America. They are a bold and moving reminder of how far we have come and how far we can go. These are revelations from the heart. “

“Absolutely!” Flower said. “We’ll be back in person, just as tough and diverse, and thankful that the first one exceeded our expectations.”

Evelyn Mertens is a playwright and marketing consultant based in North Westchester.