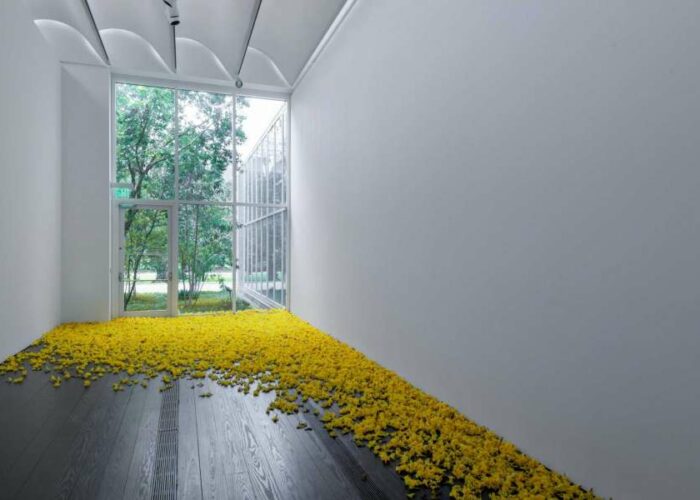 Allora and Calzadilla’s “Graft” is set up in Menil’s east corridor and beyond. It contains thousands of yellow flowers in seven stages of decomposition, derived from the flowers of a species of oak native to the Caribbean.

Brooklyn-based artist Brie Ruais brings her new large-scale ceramic pieces to Houston for “Movement at the Edge of the Land,” the artist’s first institutional solo exhibition. Ruais creates each piece from its body weight in clay, but the range of expression is abstract, physical and captivating. Some pieces almost look like leftovers found after a fire, with the cuts and gouchings and twisted shapes providing twisted beauty rather than smooth outlines. Ruais created the pieces specifically for the exhibition space, which is entering the Moody Gallery at Rice University this week.

Or: Moody Center for the Arts, Rice University, 6100 Main

3. Community day “The specters of midday”

There are three reasons to include the Menil Collection “Noon Specters” Community Day in your weekend calendar. On Saturday, Da Camera presents a Caribbean-inspired jazz concerto by Will Cruz and Quattro; Writers in schools will organize a personalized poem pit stop by an emerging writer; and students in the University of Houston’s Creative Writing Program will read a selection of poems by poet Aimé Césaire. The trio of happenings celebrates the unmissable exhibition of Allora & Calzadilla; picnic blankets are encouraged, as is trips to on-site food trucks.

The Children’s Museum of Houston reopens on June 8 with a new exhibit, “Sights Unseen”. The highly Instagrammable phosphorescent experiment explores the anatomy and physiology of the eye, what makes up visible light and how animals see compared to humans.