It also propelled her into the Moth organization, where she volunteered to help the nonprofit with communications and education, and where she eventually became the artistic director of The Moth.

This year, Burns, a native of rural Alabama, co-wrote a book, “How to Tell a Story: The Moth’s Essential Guide to Memorable Storytelling” (Penguin Random House, $28). The post is one of many events celebrating The Moth’s silver anniversary this year.

What is the moth? It’s the brainchild of novelist and Georgia native George Dawes Green, who, after moving to Brooklyn, pondered a favorite childhood experience: sitting late at his St. Simons home, listening to his older parents tell stories. (Later, when Green was a young adult in Brunswick, story time included flying nocturnal insects, which gave The Moth its name.)

George Dawes Green, founder of The Moth and Savannah native, said the South seems to cultivate a love of storytelling. “There’s something particularly conducive to Georgian nights, under the Spanish moss, with a glass of bourbon and that feeling of tranquility.” Courtesy of The Moth

George Dawes Green, founder of The Moth and Savannah native, said the South seems to cultivate a love of storytelling. “There’s something particularly conducive to Georgian nights, under the Spanish moss, with a glass of bourbon and that feeling of tranquility.” Courtesy of The Moth

Green somehow transplanted that experience to his New York apartment and created a regular gathering of storytellers.

“That first Moth was a magnificent mess,” founding board member Melvin Estrella recalls in the new book. “The stories were so long, we ran out of wine!”

Green tinkered with the ground rules. Each Moth meeting had a curator, a different theme, and sometimes an exotic location. Participants would respect a time limit. The stories would be true. There would be no notes and no interruptions.

In 25 years, The Moth has grown exponentially. It hosts StorySLAMS in 28 cities, including London, England, Melbourne, Australia, and Atlanta. These are open-mic invites where anyone can put their name in the hat to be randomly selected to tell a story on a specific theme.

The Moth Radio Hour, presented weekly by PRX on more than 575 radio stations, and The Moth Podcast, downloaded 90 million times a year, reach large audiences. And there are Moth storytelling workshops for high school, college and adult students.

At The Moth, it’s an article of faith that learning to tell a story is an essential skill, a tool of self-discovery, and that stories can rewrite the way a community, even a nation, sees itself. 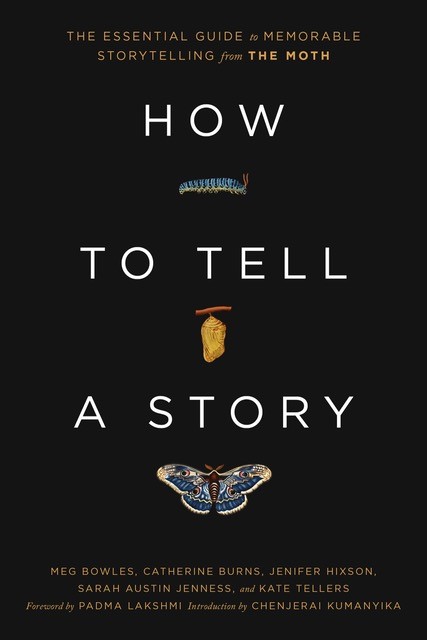 Above all, telling a personal story, in a room of attentive listeners, is a path towards a unique union. “Some of the best nights at the Moth can feel like the storyteller and everyone in the audience are breathing the same breath,” the authors write.

Moth stories heard on the main stage or on the radio show and podcast come from the heart of the storyteller, but are cultivated with the help of a Moth director. Moth staff members spice up the storyteller with questions, they help find the emotion behind the anecdotes, and help the storyteller distill meaning from events in their own life.

For those of us at home, the authors of “How to Tell a Story” suggest using the book itself as a guide to unearthing and refining the personal story inside each of us.

Here are some of the guidelines:

Mainstage stories are limited to 10-12 minutes. StorySLAM participants only have five minutes.

Tell your story to a friendly listener before presenting it at the next dinner party.

Don’t try to be the hero

“We teach in the book: Be prepared to relate to yourself,” Burns said. Focus on “not the moment you saved the day, but the moment you might have messed up. People identify with you a lot more.

“The only people in The Moth who ever stopped their story and didn’t continue were people who memorized their speech,” Burns said. “If you have it memorized, you have to remember the words. If you haven’t memorized it, just memorize the rhythms.

The intro and teardown are crucial.

Your story must be true

“But there are always embellishments along the way,” Green said. “We don’t have a police force, we don’t have the Moth Investigative Agency,” so The Moth depends on its speakers to fit, more or less, to the facts.

Atlantans can get a taste of a live Moth event on June 13 at Theatrical Outfit’s downtown Balzer Theater during the monthly StorySLAM hosted by the theater group. This month’s theme is birthdays.

“I don’t think we’ve ever had a night where we weren’t sold out,” said Jon Goode, poet, TV commercial writer and Atlanta Slam host.

The Moth derives much of its fan base from the NPR show. “That audience is older and white,” said Goode, who added that he and Atlanta producer Meredith Danielle are working hard to appeal to a more diverse crowd that’s “black, white, and somewhere in between.”

As the world tries to tell us how different we are, “when you listen to these stories, you realize how much we have in common,” he said.

The Moth celebrates 25 years of personal stories with a new practical book. In the book, the authors write, “Some of the best nights at the Moth can feel like the storyteller and everyone in the audience are breathing the same breath.” Courtesy of Karen Pike 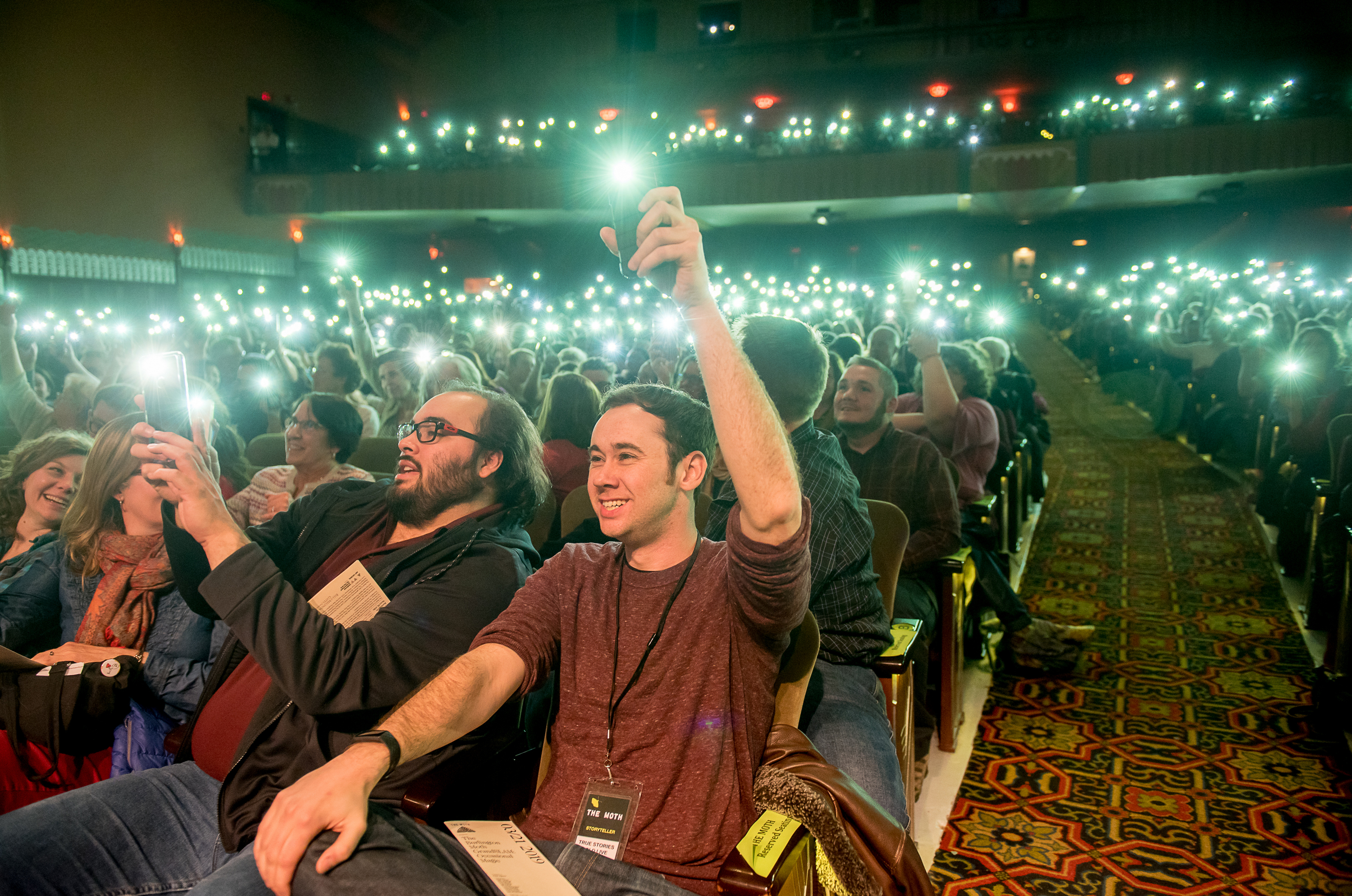 The Moth celebrates 25 years of personal stories with a new practical book. In the book, the authors write, “Some of the best nights at the Moth can feel like the storyteller and everyone in the audience are breathing the same breath.” Courtesy of Karen Pike

Green, 69, said 25 years ago the idea of ​​patrons paying to sit in a room and listen to the stories of non-famous people was considered strange, even revolutionary.

“When I went to see my friends, everyone was skeptical.”

They asked him: don’t you need music? How about a single story? Why not focus on children’s stories? “Nobody had ever organized an evening of personal stories.”

Now, he says, there are hundreds of presentations a month. “We are perhaps the largest theater production company in the world, if you consider all the shows we produce. I once saw someone write somewhere that The Moth was the first global movement to come out of South Georgia since the Girl Scouts.

Speaking the day before The Moth’s annual Moth Ball – a Silver Ball this year – held in New York with David Byrne as guest of honour, Green acknowledged there can be a dark side to power stories. They can be used to generate false narratives and manipulate others for nefarious purposes.

As an example, Green, an eighth-generation Savannahian, said the pull of antebellum mythology ran strong in his family. “When I was a kid, I listened to these Lost Cause stories passed down from generation to generation, which had a profound influence.”

The Moth intends to undo this kind of bullhockeying by resurrecting stories that have been suppressed and expanding our narratives to include those that have been left behind.

Green’s latest novel, “The Kingdoms of Savannah,” due out in July, will work along similar lines, he said. “There will always be this escape that allows us to keep these old stories,” he said. “I don’t know, maybe these stories will change that.”

book review By Derryll White Mina, Denise (2021). Rizio. Denise Mina is a Scottish playwright and novelist. She also does graphic novels and is sometimes referred to as the author of Tartan Noir. Working a number of odd jobs during her teens and twenties, she eventually returned to school and earned a law degree from […]

The Classroom launches Fiver Fest with a fundraising event The Totally Locally local shopping campaign kicks off in Thanet from March 12. Thanet District Council, as part of the Welcome Back High Streets funding, has partnered with Totally Locally to encourage business owners to work together to celebrate the island’s independent high streets and help […]